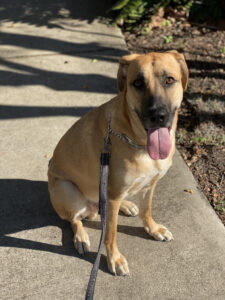 Draco is a sweet, loving cir mix(not 100% certain on breed because he was rescued as a puppy). I have had him since he was 8 weeks old but unfortunately, now that I’m living in an apartment instead of a house, this is no longer an ideal environment for him. He has lots of energy and loves to play, but he is also about 80lbs and I’m pregnant now so his playing can be a bit too rough for me. I haven’t had much of a chance to socialize him but he seemed to want to play with the few dogs he has interacted with. He is very protective and loving, he would do best in a home with someone who has a large fenced in backyard or even a farm! He loves to run. The website isn’t allowing me to pick the neutered option but he IS neutered.