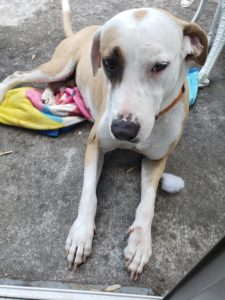 Chuck is one of the sweetest dogs I’ve ever met, constantly banging his tail from wagging so hard at anyone he meets and up against anybody for attention constantly.

Except my toddler, and I assume toddlers in general. He does not get along with her and as such I can’t offer him that attention or allow him inside unkennelled. He does well with children 10+, other dogs, and my cat.

At playtime chuck sprints and throws his toys around for himself to catch until he’s worn out and is a blast to just watch or get involved by catching his toys from him and throwing them again.